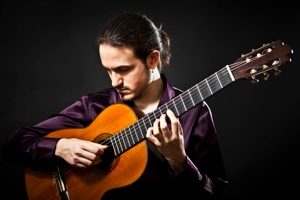 Alessandro Benedettelli started studying classical guitar when he was 8 years old, in 1994 . He gave his first solo recital at the age of 14, with a programme that run from Eighteenth Century music to Contemporary music. Under the direction of M.° Fabio Montomoli since 1998, he achieved the Diploma in classical guitar in 2004, as external candidate,  with full marks “cum lode” at ” Pietro Mascagni” Institute of Livorno. Only two days before, he gave his official debut concert at the 9° International classical guitar Convention at Alessandria. In 2007 he achieved the Degree in “Discipline Musicali” at the Conservatory of music of Vicenza with full marks in the class of M° Stefano Grondona. He attended  specialization courses with maestros M. Battisti D’Amario, Paolo Pegoraro, Matteo Mela, J. T. Kreusch, Alirio Diaz, G. Fierens, G. Bandini and, at the Chigiana  Academy of  Siena, with Eliot Fisk and Oscar Ghiglia, getting a “Degree of Merith”.

He already has on his credit many concerts, both as soloist in many Italian’s countries and in some chamber groups, besides collaborating steadily both with the duos with M° T. Angelini (violin) and M° G. Vai (clarinet), with the argentian tango trio “Milonga Clandestina”, with the brasilian music trio “Olodum Bahia” (with Rino Bruciaferri at percussions) and with “Blue Note Orchestra” (a “symphonic-rock” orchestra, in which he play electric guitar and do some of the original musical arrangements), showing off great ability both in classical and in modern repertory.

He took part to national and international contests since 1999, being awarded absolute first prizes at Grosseto, Campi Bisenzio, Castelfidardo and at “Riviera Etrusca” contest and he received “Leo Brouwer Prize” at the XXIII° Certamen A. Segovia in La Herradura (Granada, Spain) in 2007 for the Best Interpretation of the contemporary piece “Cromatico”, written by Jorge M. Gonzalez.

One year later, Gonzalez wrote “Cromatico II (Ritmico)” and dedicated it to Alessandro.

In 2008 with Daniele Benedettelli written and realized their rock opera “Orpheus“.

With his brother Daniele, since 2008 they started composing music for short movies (“Il Pittore” by Benjamin Maier, “C.I.A.K.”, “Gli Angoli della Notte”), tv and cinema spots (“The Museum” directed by A. Marini and “Antidoping Sport UISP spot” directed by M. Petrini) and in 2010 they composed their first full-lenght movie’s soundtrack, for the movie “La Marea Silenziosa”.

On 12.12.2011 he published his first self-produced cd, Waiting 2012: an intense, visionary, evocative solo album in which guitars was used as a powerful expressive weapons. 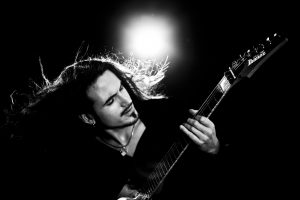